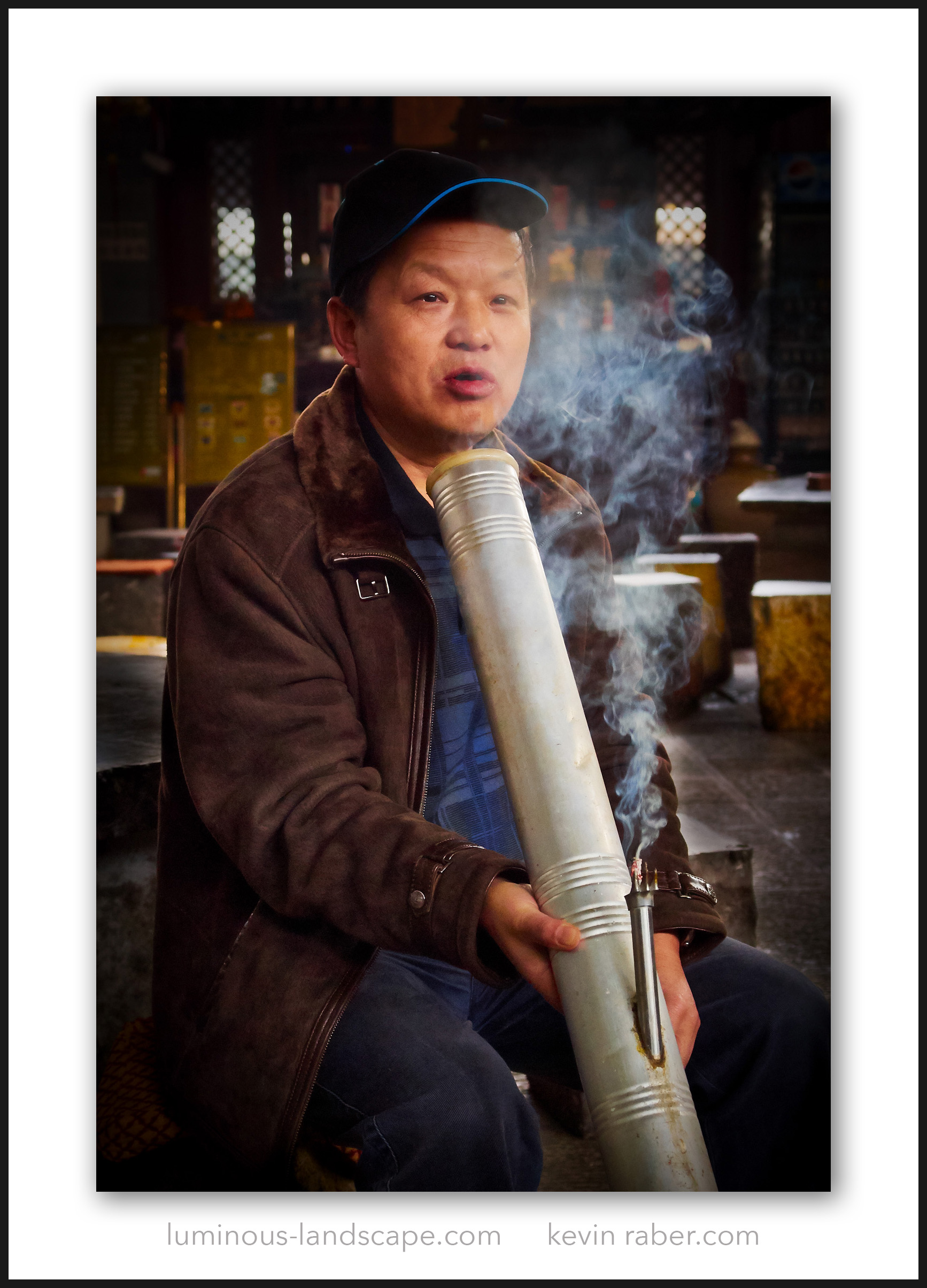 I was running a workshop in the southwest part of China and on one of our lunch breaks we stopped at this very rustic restaurant.  When I say rustic, I mean they were killing chickens and then making our lunch.  This part of China was very different from what you see in the east with the big cities.  Even the hotel rooms were rustic and it was freezing cold at night and the only heat was a heating pad under the sheets of the worst bed I ever slept in.  Anyway, back to the image.  After lunch, a few of the guys on the workshop decided it was time for a smoke and they were kind enough to let me shoot a few images.  I liked the light coming in from behind and the way it illuminates the smoke.  They tried to get me to smoke with them but just the second-hand smoke was enough to knock me out.  Interesting experience to say the least. This was shot on an Olympus MK 5 camera.

While in China last week we were at a restaurant and I saw all these metal pipe like devise in a corner.  I asked what they were and got a demo.  You take a cigarette and place it in a small holder at the bottom.  Then you take giant deep breaths through the pipe.  You get a large lung full of air.  And exhale.  personally it would have knocked me out.  Seems that certain heavy smokers enjoy this.

So while we were on top of this mountain in China I looked down the road and saw these two figures emerging from the fog.  I started shooting them.  They then stopped by a small pond and started to rake some items out of the pond and put these items in they baskets.  They then continued walking.  This shot was made as they began to disappear in the fog the same way they came out of the fog.

The last few weeks I have been in China leading a PODAS workshop.  Interesting are to photography.  Unfortunately the weather didn’t cooperate much and we were stuck in the thickest fog I have ever seen.  Actually we were in cloud as we were very high up on a Mountain in the  Yusmnyang area of Southwest China.  Never the less every now and then the fog would clear a bit and present some amazing images.  This si a shot of a lonely tree with terraced fields in front as the fog opened up for just one minute.  I opted for grain and BW to give more of the mood to the image.

I have been gone for about two weeks.  Had some business in Bangkok and then was a leader of a PODAS workshop in souther China.  The area of China we visited is a very interesting area for sure.  I have a lot of stories to tell.  This image was made while visiting a typical Hani Village.  It was located on top of a large mountain completely cloud covered.  We spent a few hours walking through tis village and were photographing the people and homes.  Quite a lovely place and good glimpse into how some people still live today.  I had a group of 20 Chinese photographers with me and we were busy shooting two girls sharing some food in front of their house.  Off to the side I saw two boys playing and trying to get our attention.  I broke off and went to shoot the boys and they hammed it up and were having all sorts of fun.  Then all of a sudden one of the boys grabbed his brother and gave him a great big kiss. And, BINGO there it was.  A fleeting innocent happy moment.

Wow…what a trip this has been.  A few weeks ago I was in Ireland.  This last 10 days I have visited 4 cities in China.  Now I am in Hong Kong to do my last presentation tonight.  I hear we have 150 people registered.  Should be fun.  The photographers in China are very passionate and take their photography seriously.  We have been promoting a photography workshop (PODAS) for the China market to be held in Death Valley this November.  Should be a great time.  Tomorrow I fly home, hopefully with an upgrade to business class.  I arrived in Hong Kong after a very civilized train ride for two hours from China.  I awoke this morning to the sunrise picture above.  Sorry, it was shot on the iPhone and may not be the best.  The weather is still 100 plus degrees.  Can’t wait to get back to a more moderate 87 degrees.  I get back with just a few recovery days before starting the PODAS Chicago workshop next week. This will be a workshop focused on Architectural photography.  Should be fun.  I’ll post again when I get home this weekend. 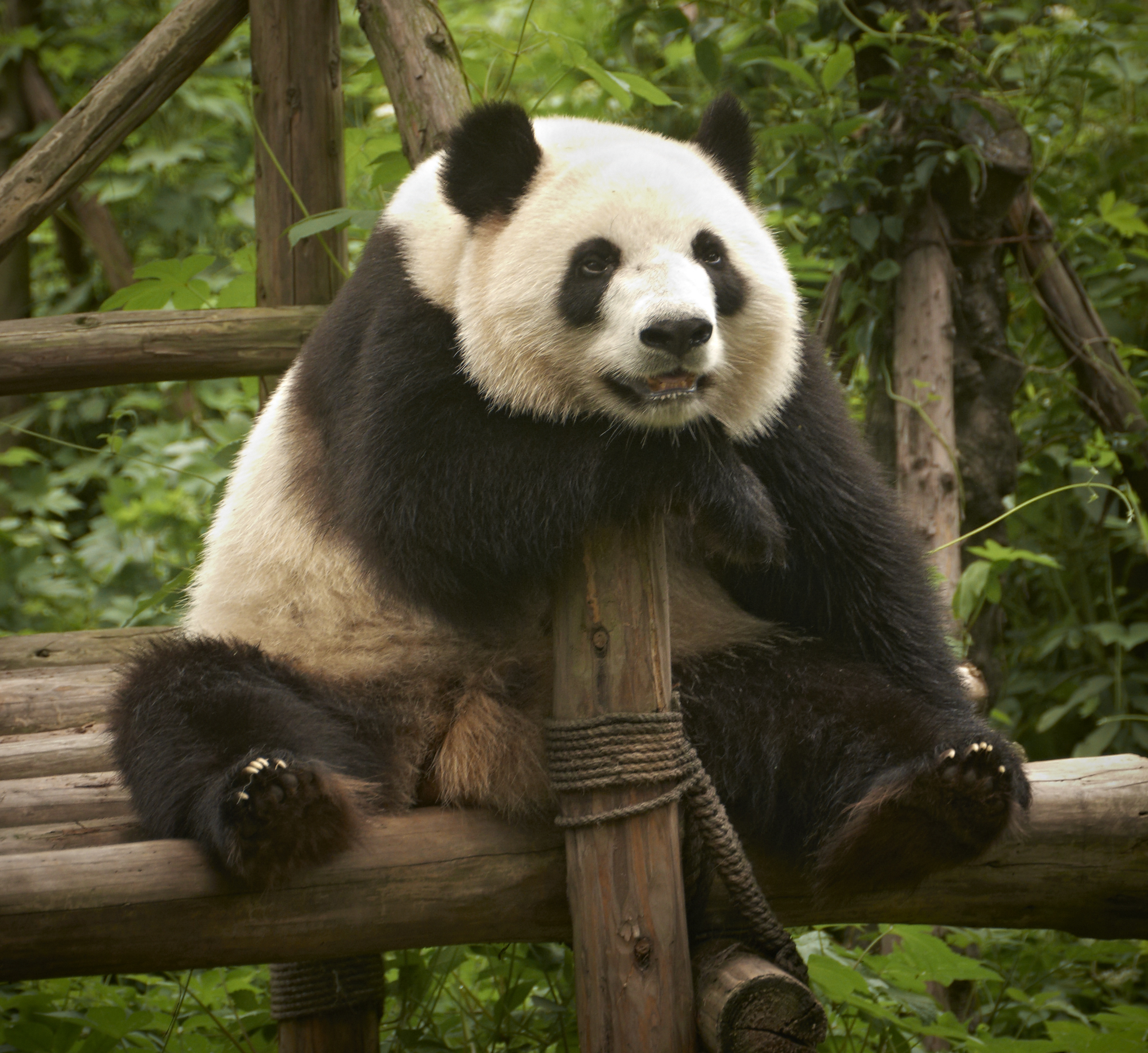 So, blogging from China is still hard to do.  I am also having Facebook withdrawal as I can’t access FaceBook form China.  But, I am having a great time.   I started my trip out in Beijing and for the last few days have been in Chengdu.  Here I did a few presentations on PODAS workshops trying to get the Chinese market interested in a photography workshop in Death Valley this November.  We have had more than 50 people at each presentation and they have been very welcoming to me and PODAS.  Yesterday and today have been down days and I have had a chance to see some of the wonderful sites in the Chengdu area.  Yesterday I visited the Panda Research facility and that is where I took the wonderful photo for today’s blog.  What would a trip to China be without a Panda photo. We caught a cab just as a torrential rain storm hit.  It kind of washed out the rest of the day as the heavens opened up and it just poured down rain.  Never the less it was a great day with wonderful meals with great new friends.  Today, I visited two areas. One a river area with all sorts of beautiful places along cliffs and the river.  Lots of climbing and walking.  I even managed to slide butt first down a muddy hill.  It’s very hot here and you need to drink a lot of water.  Lots of walking and climbing.  We also visited a mountainous area and it seems that we climbed hundreds of steps to the top.  It was a beautiful area and I am sure I’ll be posting some images from this wonderful area.  It was then back to the hotel for a refreshing cool shower and some relaxing before a dinner with fellow Phase One members and our local dealer.  All in all it’s been a very special trip so far.  Tomorrow I head to Guangzhou where I will do two presentation and then to Hong Kong where I will do presentations on Thursday and finally a very long plane ride back home on Friday.  I hope all of you have had a great fourth of July weekend.  I will make up for  missing the holiday next weekend with my own fireworks and burgers on the grill.  Look for more posting when I can get online.